We invite current and former US Women’s National Team members to the Academy to coach and inspire our athletes. Visiting Pros are aspirational role models for our athletes. Visiting Pros, who typically spend one day at the Academy, actively coach on the field. They also answer questions, sign autographs, and take photos. Mia Hamm, Kristine Lilly and Tisha Venturini Hoch formed TeamFirst Soccer Academy in 2011 with the goals of sharing their passion and love for the game and helping young women understand that personal growth and team success go hand-in-hand. TeamFirst helps girls cultivate a sense of self-worth in order to reach their full potential in life. Athletes come to TeamFirst to learn, work, compete, and have fun, and to play with a love and respect for the game.

Learn more about the TeamFirst program. Kristine has coached at the Academy for the past four summers through our partnership with TeamFirst Soccer Academy. She will return for the seventh time with TeamFirst during Session IX of the 2020 season. She also came to camp on her own as a Visiting Pro during 2015 and 2016. Learn more about  Kristine.

Around the Campfire with Kristine Lilly 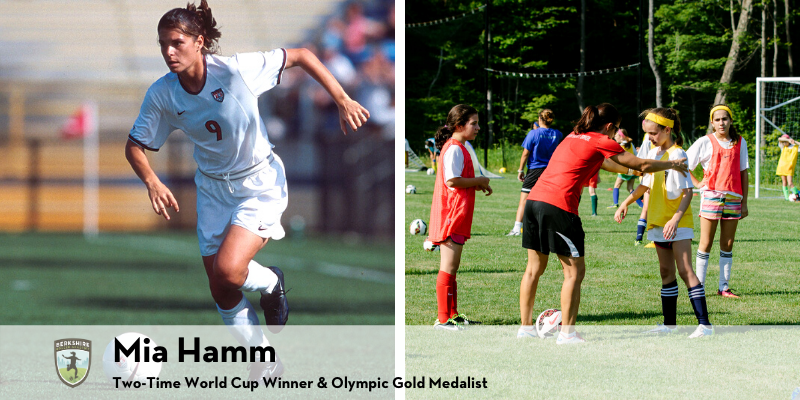 Mia has coached at the Academy for the past several summers through our partnership with TeamFirst Soccer Academy. She will return for the seventh time with TeamFirst in 2020. Learn more about Mia.

Mia Hamm joined the U.S. Women’s National Team in 1987 and played for 17 years. She was named FIFA’s “World Player of the Year” in 2001 and 2002. In 1991, at age 19, Hamm became the youngest team member in history to win the World Cup. Five years later, Hamm and her teammates secured the gold medal at the 1996 Summer Olympics. In 1999, Hamm set a new record for most international goals. The record stood until and held that title until 2013 when it was surpassed by Abby Waumbach. She remains the USWMNT’s all-time assist leader. Hamm was Soccer USA’s Player of the Year from 1994 through 1998 and was named MVP of the 1995 Women’s World Cup. She retired in 2004 after helping her team win gold at the 2004 Summer Olympics. She is married and has three children. She currently serves on FIFA’s Development Committee. She is married and has three children. Tisha has coached at the Academy for the past several summers through our partnership with TeamFirst Soccer Academy. She will return for the seventh time with TeamFirst in 2020. Learn more about Tisha. U.S. Woman’s National Team member Andi Sullivan spent opening day of Session 5 at Berky in 2019. After eating lunch with the campers, she answered questions, took photos with every cabin and spent the entire first session on the field with the campers. Andi Sullivan earned her first cap with the U.S. National Team in 2016 and has 11 caps to date. She played in the 2019 She Believes Cup and, at only 23, has a bright future with the National Team. Andi was a four-year starter at Stanford University, leading the Cardinal to a national championship in 2016. She is a past winner of the Hermann Trophy, awarded to the country’s best collegiate player and was the number one overall draft pick at the 2018 NWSL College Draft. Andi finished second in the 2018 NWSL Rookie of the Year Voting. In 2019, she was named team captain. Andi was one of 24 players called up for the USWNT training camp prior to the USA’s November 2019 matches against Sweden and Costa Rica. Yael attended the University of North Carolina (UNC), where she was part of the 2006 and 2008 National Championship teams. Yael got her first cap with the U.S. Women’s National Team in 2007 against England and was in and out of National Team camps for the next several years. She became a more permanent member of the team in 2010 and ultimately appeared 26 times for the national team.

In 2016 Averbuch founded Techne Futbol, a cutting-edge personal training app for soccer players of all ages and experience levels. The Techne system offers training sessions that can be done anywhere at any time with minimal equipment.

Yael was recently named Executive Director of the NWSL Player’s Association. In that capacity she represents all NWSL players in conversations with the league with the goal of advancing women’s soccer in the US. Lori was our 2018 Visiting Pro during Session III and came back later that same summer as a master coach. She returned as a Master Coach in 2019 for Session VII: Invitational Week.

Lindsey played at the University of Virginia from 1998–2001 and was the school’s first-ever Atlantic Coast Conference Player of the Year. Lindsey was named Female Athlete of the Year at UVA for the 2001–02 academic year. She represented the US Womens National Team 31 times scoring once and was part of the 2011 World Cup winning squad and the Gold Medal winning Team USA at the 2012 Olympic Games. She played professionally in both the W-League from 1997-2007 and in the NWSL from 2012-13. Brandi coached at the Academy during Session I in 2015. Athletes saw Brandi on the field and throughout the camp, including on the BLOB.

Highlights from Session I with Brandi

Around the Campfire with Brandi

Chastain was an important contributor on two Women’s World Cup championship teams (1991 & 1999), two Olympic champions (1996, 2004), and an Olympic silver medal winner (2000). In 1999, she became a household name after she delivered the game-winning shootout penalty kick against China in the FIFA Women’s World Cup final. Chastain played in 192 games for the national team and scored 30 goals. She has also worked in soccer broadcasting as both an Olympics and World Cup color commentator.

As a collegiate star, Brandi led her Santa Clara University team to two NCAA final four appearances and was named NCAA Player of the Year in 1990. She also led her high school team to three California state championships.

In addition to her stellar playing career, Chastain is also an experienced and well regarded soccer coach. She has spent years assisting her husband Jerry Smith, the longtime head women’s coach at Santa Clara University. She currently coaches girls teams in the Olympic Development Program (ODP) and has coached both boys and girls at the high school level as well as her son Jaden’s youth teams. In 2017, Rose made her first (surprise) visit at BSA. Athletes were coached by her on the field and enjoyed getting to know her better off the field at a Q&A session..

Rose has been on a meteoric rise since her breakout year in 2015 as a junior at University of Wisconsin. During her senior year, she was called to train with the United States Women’s National Soccer Team. On March 4, 2017, Lavelle made her debut for the U.S. Women’s National Team, going the full 90 minutes against England. She scored her first international goal on April 9 against Russia, and added a second (the game-winner) against Sweden on June 8 in Gothenburg.

Prior to joining the US National Team, she already had quite a bit of international experience. In 2014, she was a starter on the USA’s U-20 Women’s World Cup Team in Canada and was one of the USA’s most effective players in the tournament. She also accomplished a remarkable feat at the 2014 CONCACAF U-20 Women’s Championship in the Cayman Islands. She neither scored a goal nor gained an assist over the during the tournament, but her impact on both sides of the ball was so great that she won the Golden Ball as the tournament’s best player.

Rose currently plays for the Washington Spirit of the NWSL. Kate Sobrero Markgraf coached at the Academy during Session V in 2015. Athletes were coached by her on the field and enjoyed spending time with her off the field.

She currently serves as the general manager of the United States Women’s National Team and was instrumental in hiring current Coach Vlatko Andonovski in October 2019. Heather O’Reilly coached at the Academy during sessions in 2013 and 2014. Athletes were coached by her on the field and enjoyed spending time with her off the field.

Heather O’Reilly (or HAO as her teammates call her) is a midfielder for the U.S. Women’s National team. HAO was chosen for the Olympic roster in 2004. Over her twelve year USWNT career, she appeared 231 times and helped the team win three Olympic gold medals (2004, 2008, 2012) and a Women’s World Cup in 2015. She attended the University of North Carolna and led the Tarheels to national championships in 2003 and 2006. UNC retired her no. 20 jersey honoring her into a distinguished group of alumni including Tisha Venturini, Kristine Lilly and Mia Hamm. HAO has played professionally in both the WPS and NWSL. In 2015, HAO led FC Kansas City to its second NWSL Championship title. In 2017, she joined the Arsenal Ladies. She played there in the Women’s Super League until May 2018. Cindy coached at the Academy during Session IV in 2015. Athletes saw her on and off the field and especially enjoyed her Campfire Q&A session.

Parlow Cone was the head coach of the Portland Thorns FC in its inaugural 2013 season and coached her team to the first National Women’s Soccer League championship. From 2007-2012, she was as an assistant coach for University of North Carolina’s women’s soccer program. A native of Memphis, Tenn., Parlow Cone also spent six years (2007 – 2012) as the director of coaching for senior girls programs (U-15 to U-18) at Triangle United Soccer Association in Chapel Hill, N.C. She has been a member of the U.S. U-14 and U-15 Girls National Team coaching staffs and holds a USSF “A” License.

Parlow was a founding member of the Women’s United Soccer Association (WUSA), helping her Atlanta Beat team reach the playoffs in each of the league’s three seasons (2001–2003). Parlow Cone played college soccer at the University of North Carolina, where she was a four-time All-American and a member of three NCAA Championship teams. She twice won the Hermann Trophy as outstanding female collegiate soccer player (1997 & 1998) and was named ACC Female Athlete of the Year in 1999.